Luggenmener was a Tasmanian Aboriginal woman who lived in the early 19th century.  She faced death to protect her little son from a massacre of her People and lived through the Black Wars.

Her country was in the Ben Lomond area of north-east Tasmania. A map of this area is contained Table 1 below.  Tasmania was originally called Lutruwita, according to the French explorer, Nicolas Baudin[2]. 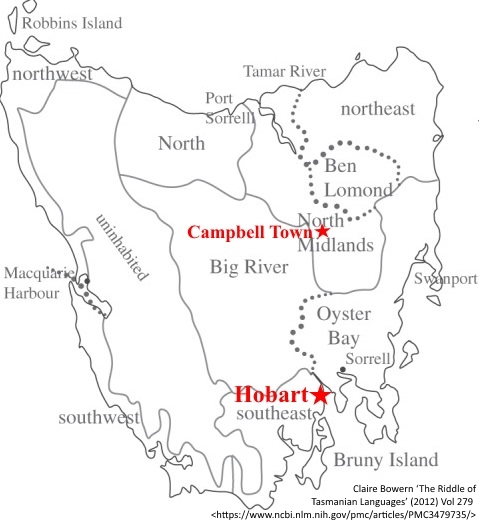 Map 1: The Island of Tasmania, showing tribal boundaries inferred from the ethnographic sources:[3].

Luggenmener had three sons.  Their names were Walter, Maulboyheener[4] and Rolepana.  Walter’s father, Rolepa, was an important Ben Lomond chief.

When the roving party attacked her People in 1829, Luggenmener threw herself over her little boy, Rolepana, entirely covered him and saved his life.  Rolepana was aged two.

John Batman, ‘founder’ of Melbourne, was responsible for leading this roving party.  Roving parties were patrols that searched for Aboriginals.  Their leaders were ‘trustworthy individuals’ who offered their services in exchange for land grants[5].

After the massacre of her People, Batman captured Luggenmener and Rolepana, along with two badly wounded men.  A letter written by Batman to the local police magistrate describes Batman’s style:

“we found it quite impossible that the Two … [men] could, and after trying them by every means in my power, for some time, found I could not get them on.  I was obliged therefore to shoot them.[6]”

Luggenmener and her baby were clearly in great danger.  Batman dispatched Luggenmener to the Campbell Town gaol[7] and took the child from her to his farm.  This farm, called “Kingston”, was located at Deddington on the slopes of Ben Lomond, near the Ben Lomond rivulet.  Originally, Batman’s Crown grant in 1824 was 500 acres, but over the years it expanded to 7,000 acres[8].

After nearly a year, Batman secured Luggenmener’s release from gaol, on condition that she acted as his envoy to a tribe he had been hunting for two years.  He chose her for the responsible role of attempting to convince the last of this tribe to turn themselves in to the authorities.  She soon made contact with the tribe but, having no intention of returning to gaol, moved freely until experiencing the soldiers of the Black Line and spending time inside and outside of it[9].  The Black Line was a series of survey lines drawn up by the colonial authorities seeking to defend themselves from the Aboriginal attacks that occurred as settlement increasingly came to occupy their country.  Defence of the Black Line involved some 2200 men, including soldiers, free men and 1,200 convicts[10].

“(t)he soldiers [extended] for a long way and that they kept firing off muskets. Said plenty of PAR.KUTE.TEN.NER[11] horsemen, plenty of soldiers, plenty of big fires on the hills. … [I] was afraid [the soldiers] would shoot [us].[12]”

She sought resort at Batman’s farm[13].

Luggenmener was then taken to Wybellena on Flinders Island, where she lived for the rest of her life. She died on 21 March 1837[14].The Protector of Aborigines at Flinders Island, George Augustus Robinson, called her Queen Charlotte[15]. Her recorded some of her experiences and drew the sketch we have of her, Image 1 below.

Rolepana, then aged eight years old, joined Batman when he travelled to Melbourne to settle Port Phillip[17]. Batman’s arrangement with Rolepana is murky. It reeks of an early Stolen Generation, a slavery ideology and potential exploitation of all kinds. It seems that early colonists coveted native children.[18] Batman is said to have openly defied the Governor and the Aboriginal Protector by refusing to allow Rolepana, and another boy, to leave his employ:

“He claimed the boys were there with the consent of their parents … He … (said) they were ‘as much his property as his farm and that he had as much right to keep them as the government.” [19]

Robinson’s sketch below, drawn in October 1832, shows Luggenmener. She is a simply clad figure, hair held up, standing straight, with her long strong arms stiffly by her sides. She faces directly away.  She seems quite young.  She looks beyond.  A key feature is a big disc on her back, like a decorative backpak.

Robinson’s handwritten notes to the sketchbook poignantly bring alive the tragedy, and her grief, as well as the beauty of the culture she continued, and that no doubt gave her strength.

“a woman with circular pieces of rope [illegible] kin – appended to her back.

As sketch-maker, Robinson recorded her cultural statement of mourning, probably as a curiosity.  Descriptions of Aboriginals grieving are common and record the relatives being generally inconsolable[22]:

“[T]he gentle feelings of our natives are almost borne down with agonising sympathy.”[23]

“The poignancy of sorrow expressed by them on the death of their friends (which has been often truly painful to me to witness) cannot be surpassed among any class of people.”[24]

The severity of grief was mitigated where traditional funerary practices could be observed.  The wartime death of a loved one was wrenching enough, but when traditional rites to ensure the soul’s transmigration were impossible, those left behind feared the deceased spirit.  The rites were immensely important and every attempt was made to retrieve the bodies of their fallen comrades.

“The ashes of the dead were collected in a piece of Kangaroo-skin, and every morning, before sunrise, till they were consumed, a portion of them was smeared over the faces of the survivors, and a death song sung, with great emotions, tears clearing away lines among the ashes.”[25]

No such traditional culture was likely available to Luggemener, save her mourning ‘habillments’.

Baudin’s expedition, only ~ twenty years before, spent six weeks studying the coastline of Lutruwita (Tasmania). Expeditioners actively interacted with Tasmanian Aborigines.  Ideas of the Enlightenment and the emergence of anthropology as a science, along with the philosophy of the French revolution – freedom, equality and fraternity –  created nuanced instructions to the Baudin team. Their response documented the people they encountered,in meetings mainly occurring at the discretion of the Aboriginals.  Song and dance were shared, gifts given and bartered, words exchanged. The Aboriginals closely observed the French and the French observed the Aboriginals.  Expedition artists, Nicolas-Martin Petit and Charles-Alexandre Lesueur, created detailed, delicate, sensitive illustrations.  Images such as those below show the rope and fibre weaving of Tasmanian Aboriginal culture in jewellery, bags and boats, a tradition likely reflected in Luggenmener’s rope-entwined mourning dress. 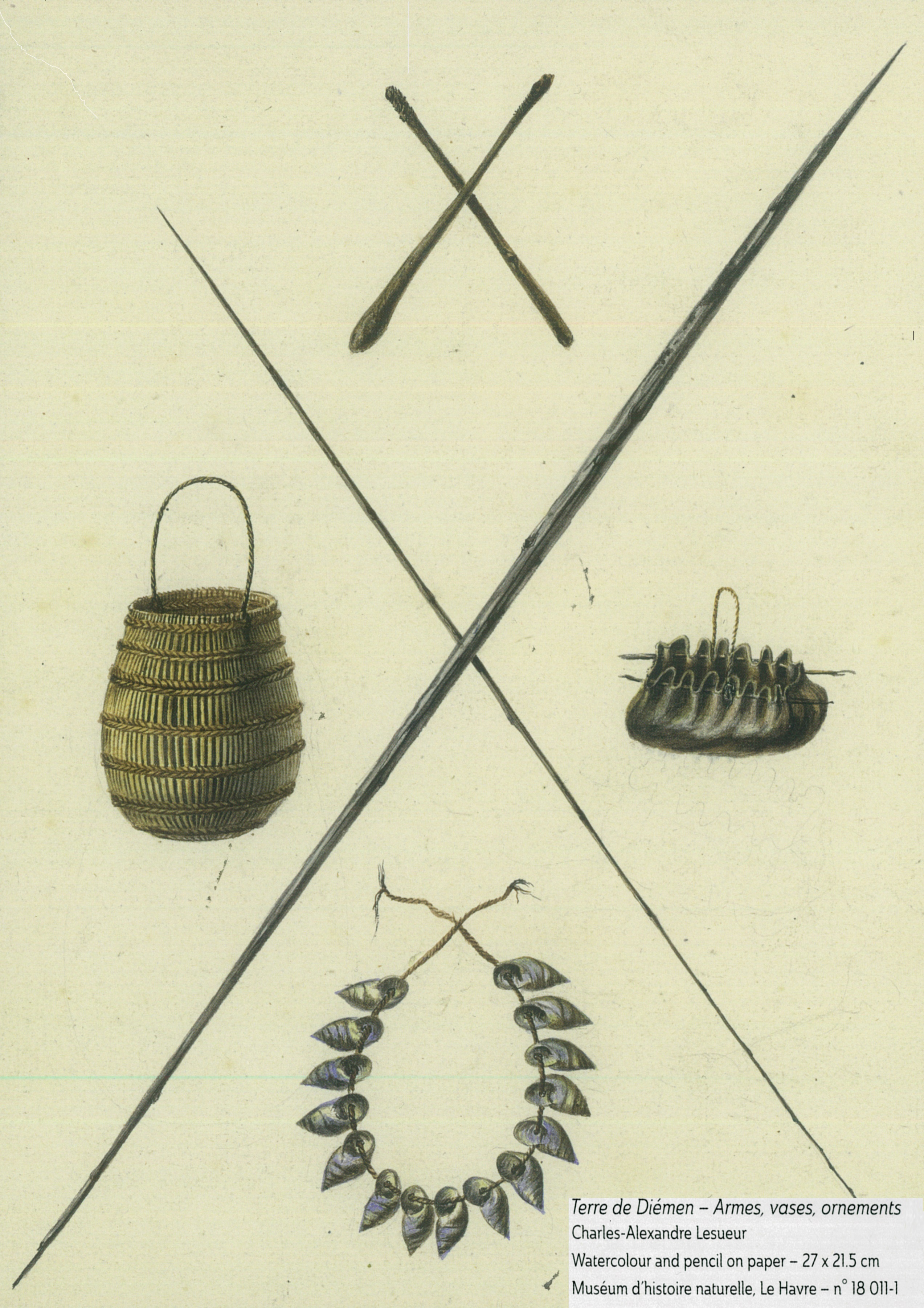 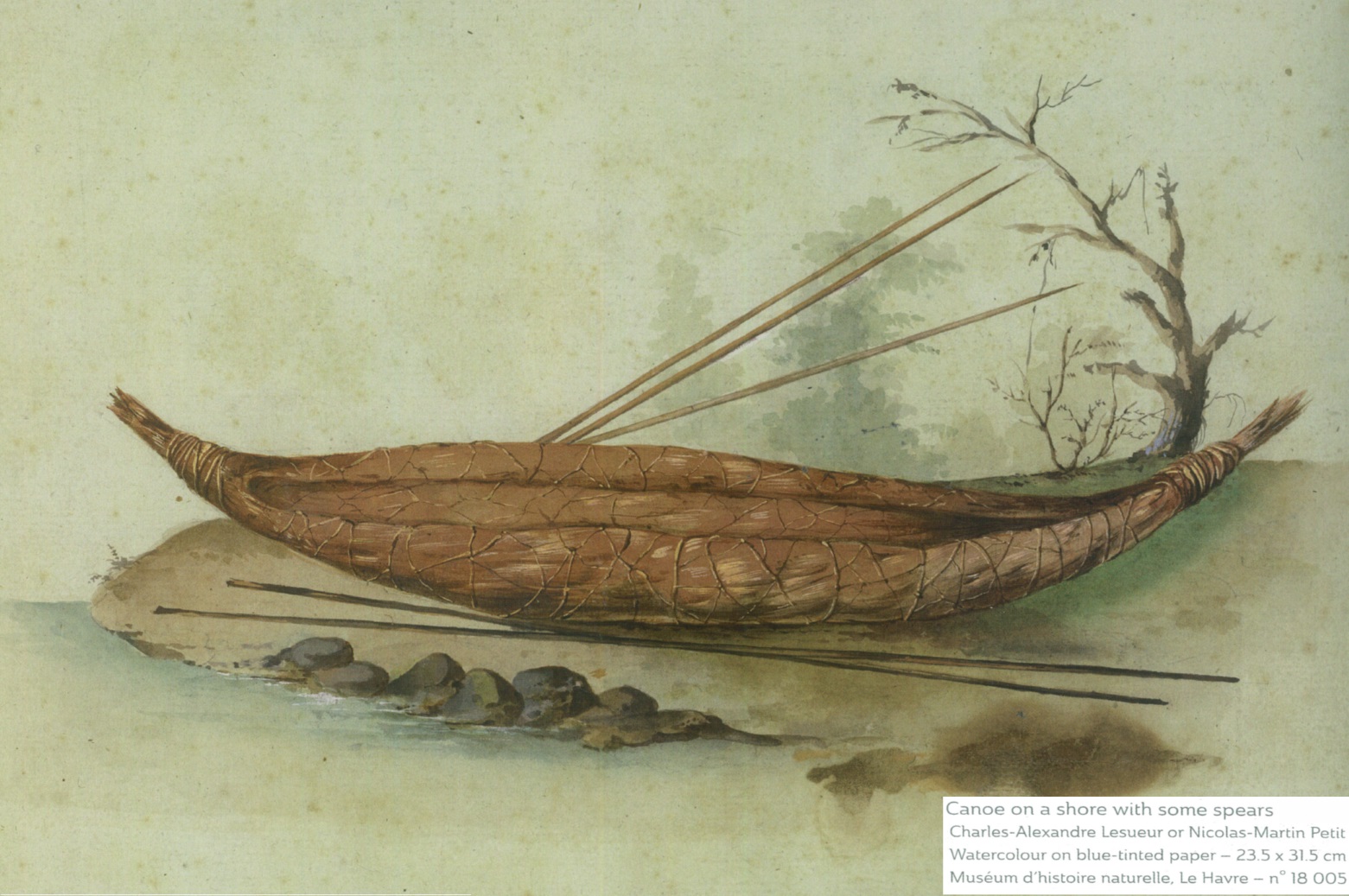 Image 3:  Canoe on a shore with some spears, Charles-Alexander Lesueur or Nicolas-Martin Petit, watercolour on blue-tinted paper[27].

In July 2018, the Protector’s poignant image of Luggenmener stands silently before us, with her mourning basket of rope.

Her wearing of the mourning disc, gives a sense of the strong physicality of her cultural mourning: the patience required to weave the rope pieces to a disc, its weight burdening the mourner as a daily reminder of lost loved ones and her little son.  This young woman, in a foreign land, her child stolen from her, her People murdered, must have burned with fiery injustice as she lived far from her Ben Lomond country, marooned on a Bass Strait Island.

Kellehers celebrates this brave Australian Aboriginal woman and her contribution to Australian culture.

Because of her, we can!